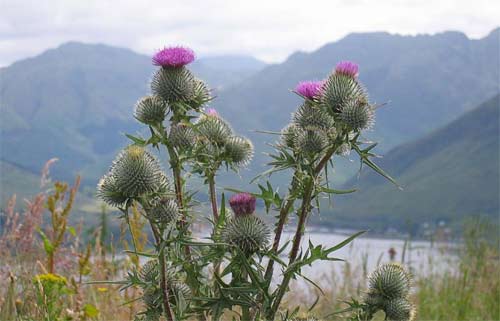 We have a prickly legend for you today – keep reading to find out more.

Around mid 13th century during a surprise invasion by soldiers of the Norse King, Haakon, at Largs ( one of Scotlands coastal towns in the West ) the story has it that after coming ashore, this Viking force planned to creep up on the Scottish Clansmen and Highlanders and overcome them while they slept. This amount of stealth required that they go barefoot – which proved to be their undoing.

Unfortunately for these unwary invaders, one of their soldiers bare feet came down hard on a Scottish thistle and his cries of shock and pain were enough to wake the sleeping Scots.

Leaping to their feet, the clansmen charged into battle and the rest, as they say, is history… and yes, the fiery Scots were victorious 🙂

Because of the heroic place that this the thistle played in the battle it was immediately chosen as a national emblem.

How much of this is truth no-one knows, but we do know that by the 15th century the Scottish thistle was being used as a national emblem.